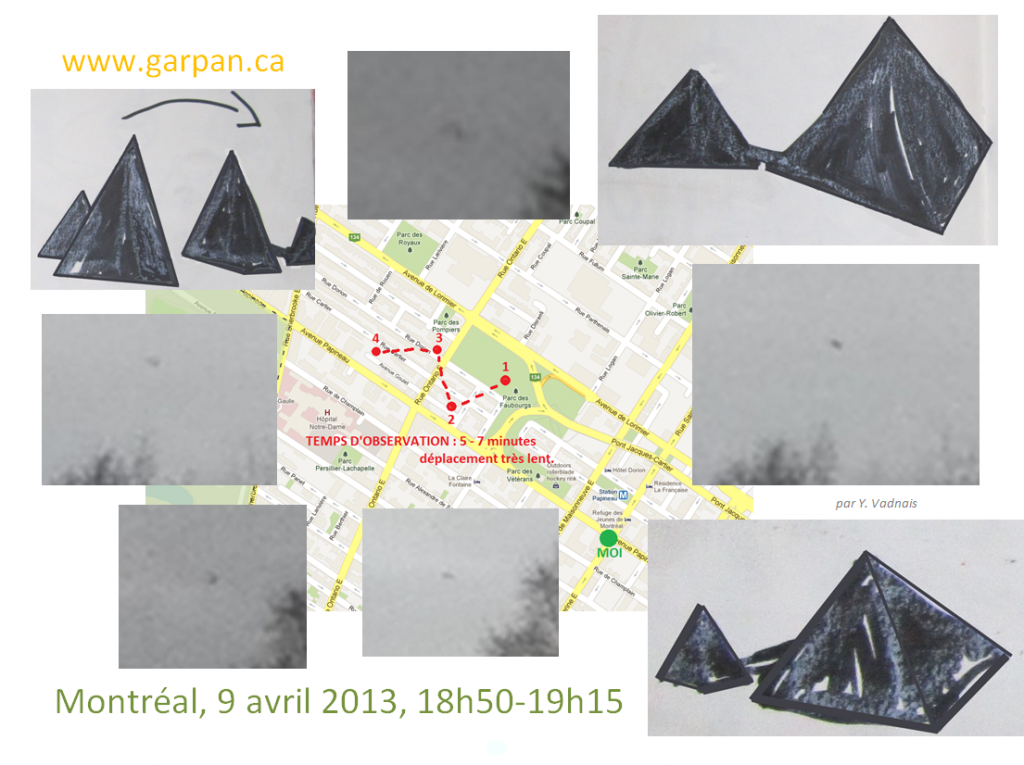 INVESTIGATOR : You are still under the shock of your observation ?

WITNESS : Not shocked, but strangely amazed ! It is quite unique to see it. It was special, I watched for several minutes. Then, is party to a point.

It : Is this your first observation was ?

T : I've seen stuff in the evening, but this is the first time I see this day. Twice in my life, it happened to me to see strange star that moved in an abnormal way. But I never pushed the furthest thing.

This time, it was daylight and it was frankly weird.

It does not look like a star. It was black. It was black as two pyramids joined together by a thread. It seemed shiny, but it does not reflect sunlight.

It : Yet, I thought I saw a single object in the photograph.

T : Yes, Photo. But the photo does not really equal what it was at the view ! It was as big as the tip of my thumb, and then, when I pulled out my iPod to take a picture, it simply does not appear on the screen, Yet when we saw the well to the naked eye.

I zooms over and then I managed to capture the object. It took me a lot to increase the zoom to get, which produces a very sharp image not. Unfortunately, we see only a black dot, but I have really seen two separate pyramids, connected by a wire, or what seemed to be a thread, the distance at which I was.

Pair Moment, a pyramid disappeared behind the other : the object was moving. This created a perspective. Sometimes, it was moving so we could not see the other pyramid. But when repositioned across, we saw good.

It : So these pyramids were always one beside the other ? They do not distanced themselves ?

T : Yes, they seemed related to each other. Maybe it was a single object formed two pyramids. I do not know what there was between the two, but there were really two separate pyramids, two triangular polygons at least !

It : Agree, we will locate it in space and time. It happened when and where exactly ?

T : It was Monday night, if I remember correctly, to 7:15 p.m.. I, I was at the corner of Papineau Avenue and St. Catherine Montréal.Je got out of the BMO bank, then I saw that object in the sky. I was with my friend, and I said "see, What is that case ?! ».

It did not look like a bird. It certainly was not a plane ; either a helicopter not ; it was not a kite. It, it was absolutely certain !

We stayed on the corner 5 to 10 minutes to observe the thing. There is even passersby who stopped, but they do not seem to pay much attention. They continued their way.

Exactly ! They observed. I did not really pay attention to the reaction of the people around me.

It : How many people watched the phenomenon ?

T: At one point, the lights were red. With the two of us, he may be 3 or 4 people arriving at the corner. This was mainly where people stopped to watch.

We stayed longer because it was weird ! It seemed that it watching something ! It walked quietly, but it followed a path, slowly, and it zigzaguait, then it's gone quietly to north.

After what happened (7-8 minutes of observation), we decided to turn back. We went west to grab a beer. When I walked into the bar, which was perhaps 25 the second corner, I told my friend : "Good, je ressors ! I go back, because I find it too impressive ! ». Then I went back to the corner. It was a minute and a half after about, but the object had disappeared.

If he had continued to the speed at which it was, I have certainly seen yet ! It was not yet delivered to the horizon.

T : He had disappeared ! I have seen nothing else. I stayed a little to watch, but there was nothing ! The pictures I've taken are not representative of what I saw ! It was very well defined, we distinctly saw.