A mother and her three daughters in their twenties observed for about 5-7 minutes a rectangular UFO with flashing dark red rectangular lights mirror. UFO are approximately 50-60 meters of witnesses and "seem to face them"… After 3-4 minutes d’observation, an intense white light projector lights to illuminate below the forested. Then the UFO began to move slowly towards the light with LED projector, until it disappeared behind the trees. During this time, witnesses hurried to call family and friends who lived Mistassini, then we headed UFO.

"We were in the dining room, near the table, not necessarily eating but it was close to the table in the kitchen. Suddenly, my younger sister opened the patio door she said "Come see here ! Il y a something in the sky and it's not a plane ! ». 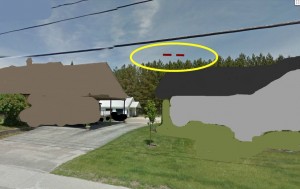 We witnessed, is voyait ça, at the same time it was a little disturbing in the sense that we could not really get, had children in the arms.

We were watching it, Still it is no sound. It does not move, it does not move left to right, there just has lights that move and there's no sound, zero, nothing ! 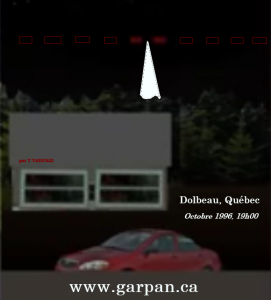 As, you see it's ... we do not really see the form because it is evening, just lights [that move]. It's close enough still, even above the river, it's more to us than over the river above. The distance, it's hard to say because we do not know precisely where it is, but we know that it is near.

Looks like it's in front of us, that's what I always thought. It was in front of us because even though we can not see inside, even if we do not see a window, door ... we see a form just because lights flash.

They are red as a kind of rouge opaque, a kind of dark red, this is not like lights "breaks char" [= Rear brake car], not light red, it flashes but simultaneously it from both sides. It's like a mirror.

It starts in the center and it disappears at the same time in the sides, this is what makes me say that it is in front of us, I do not know if this is because these lights do not work like us or if it is our perception that see it as, I do not know. It starts in the middle, it blinks and then it goes to the ends left, right and at the same time it continues to flash.

After that, when it started from after we closed the door to the cold and the patio door was all steamed up, we went in the room which is next. 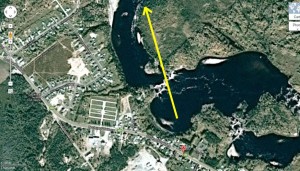 On revient, it reopens the patio door and we see that it is moving away, it's gone in eastbound, to the North-East then it crossed the river. Là il y a un large spot who is allumé, a big white spot that is lit from below. Not that we could see the shape of the spot itself but we saw that there was a intense white light which was lit below ca then walked away with the light on.

Is it at this time to continue the flashing ?

If I ask you what is the white spot was in the center or more sides ?

I remembered it was in the center when I saw that it started from. It was already moving when we went back to the patio door, if it was only a white spot on would still perceived, it went in until it disappears from our view go.

Ça is déplacer horizontal or oblique ?

It does not take altitude ?

That move any speed ?

The total duration of observation ?

Quand ça is occurring, the time we look at it all, probably five, six ou sept minutes. It's annoying, it is hard to say besides, in those days, there were others who had seen. It was passed to the radio, we had heard that the new. I had phoned someone who is interested in it, a person in Quebec who takes care of it, there was some issue at a given time on it.

I managed to call this person because I thought it was important to me this information, to communicate.

I had found so skeptical I was there "yeah .... but if. "As if he did not believe me and then what would it be my best interest to call him and tell him that. Questions I found not like yours, you want to know as much as possible you we poses relevant questions. It, I thought it was not that.

What was the kind of questions ?

Oh… it was more as if there was any doubt behind his question as if I was lying, it was as if my testimony was not real. It's a bit the opposite of what I expected, I was disappointed with his approach.

Where to contain, I've never had to hide to say I do not know if it was relevant to often tell. I think this is information that is good to know, there wondering which is the question. We, on a vu ça, I did not invent. I would like it if someone saw something he tells me ... "