Written from the original testimony and responses during the survey text

En hiver 1981, Jimmy was visiting a friend in Saint-Augustin-de-Desmaures. To 17 h, then it was dark outside, they saw through one of the windows of the living room, off into the clear sky, a light that was accompanied by another light, smaller and flashing. None showed particular color, except for a monochrome color. We point out here that Jimmy does not remember if the flashing light was below or above the main light, but he remembers it was linked to it.

Its size, the main light made them think that a helicopter or small plane, except that it did not move and remained fixed in the sky. It was located north, far and high enough above the horizon. Looking back, Jimmy feels that she could be close to the military base in Valcartier, which is actually north of Saint-Augustin-de-Desmaures, which could be a significant factor, but there is currently no evidence positively it was well above the base or was it related.

Map showing location of the military base in Valcartier north of St. Augustine. The light would be located somewhere in the viewing angle.

Jimmy and his friend watched the light minutes, but as nothing happened particular, they stopped to observe. Half an hour later, the light was still there, exactly the same place in the sky. His friend had the idea to observe light with binoculars. They realized at that time that there was not a single light. En effet, they saw an object shaped bell that was multicolored, as an arc-en-ciel. Flashing light, meanwhile, was clearer, perhaps white. Jimmy does not remember very well the color, but she was related to the subject.

The colors were all visible at once and followed the bell-shaped object without overflow, which was reminiscent of a colorful lit bulb whose brightness is not too strong. Pour Jimmy, the fact that the colors were "contained" in the form of the bell to believe that this was an object, and not a single light.

Sketch bell shaped object seen by the witness through binoculars

After a while, they stopped to observe. Half an hour later, they checked if the object was still there, and it was no longer.

"I was in secondary 2 if I remember correctly. I'm visiting my friend. In the early evening, me and my friend looked out the living room window and there were far in the sky still light, with a flashing light, immobile. We wondered what was. We watched a little, but nothing happened and we stopped after a while, lack of action and interest. Env. 1/2 hour later, My friend suggested that I take a closer look with binoculars. I think it is a good idea, because the object (Still the light) is still there. Looking with binoculars, oh surprise! The object is not a plane or helicopter, but had the shape of a UFO. However, to my surprise, it was not as a form of classic saucer (I could imagine platform); the shape was like that of a church bell, taller than wide, with a slight curvature in the object. Color : like a rainbow sky, with bands of different colors : red, orange, yellow, blue, green. With a flashing light in the instrument, if I remember right. We watched, surprised, and after a while we left money doing something else, because nothing else happened. We looked again some time later, about. a half-hour later, and the light was part. The duration of the observation is between 1/2 to one hour. »

En octobre 1974, a few years before it took place where watching Jimmy and his friend, a bell-shaped UFO was seen between Deauville and Rock Forest, in Estrie. In this case, the object was only orange, but it is interesting to note that there was bound light on top.

Finally, of 12 the 15 July 1974, a UFO wave would have swept in the Sudbury area, in Ontario, and in the Eastern Townships. Among these were some UFOs that had a bell shape. 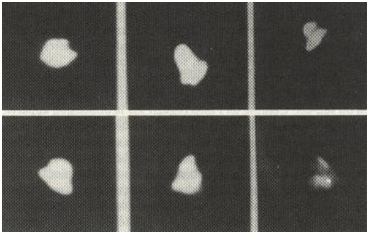 Expansion of UFO photos bell-shaped taken during the wave 1974