UFO with humanoid in Mirabel, August 2012 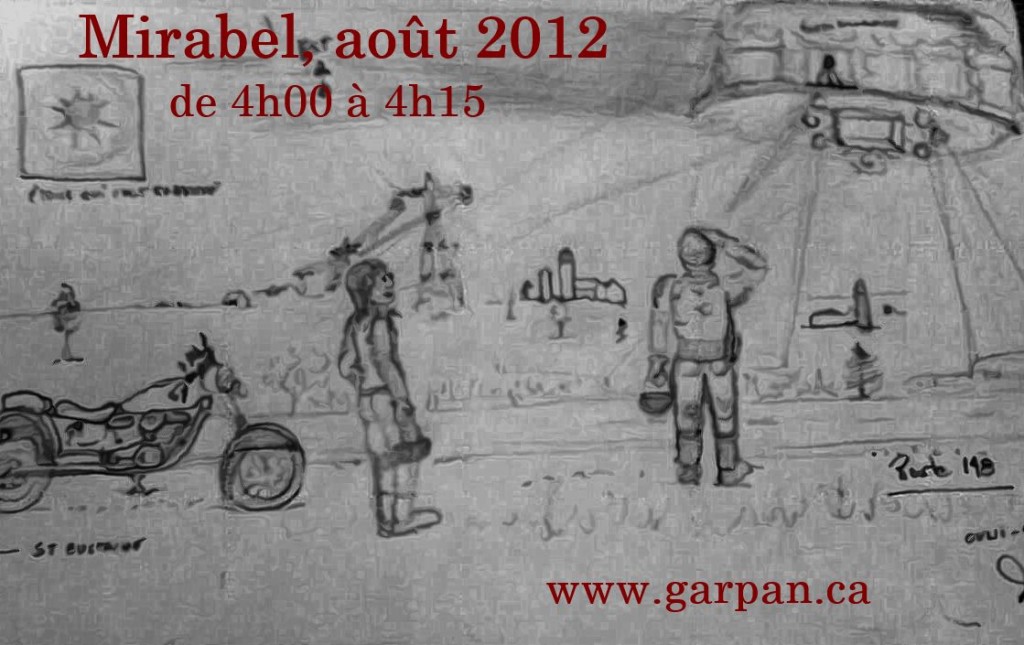 Here is a case of the most interesting UFO investigation which travels slowly. What is striking is a humanoid was seen to "windows" of this impressive UFO crossed two engine. This rarely happens, although we know of other cases where humanoids have noticed the "windows" of a vessel, or through the walls of the vehicle ! We will publish the entire file shortly:

Written statement of the first witness :

"Early August 2011, my girlfriend and I decided to go for a walk on a motorcycle in the Montreal area to enjoy the beautiful warm days we had left, to practice our hobby. On the way back, I decided to ride on secondary roads, rather than taking the highway. The simple reason was that the nights were cooler and I do not mean that we too cold on the highway. Plan de match : Laval, route 640, Saint-Eustache, Saint-Hermas, Lachute, this was our itinerary.

I remember the nights of August were relatively cold. There was approximately 4h00 am, when we passed the Autodrome St-Eustache, direction nord. I had to adjust my speed 70 km/h, at most, because the cold breeze that came from the farmland in this area we pierced the body. At this speed, so we could talk without problem, and I think that's when I sang him songs cheesy love. Eh oui, I used to do that ... I like to laugh my girlfriend.

After the two curves quite pronounced along the limits of Saint-Eustache, I saw a bright light on the horizon. The flagship aircraft ? A star ? I still need to get me to confirm what I saw …« This is not a star that ? » : meet me she had no sort of idea. All eyes on the road and this bright light, we were already close enough, to realize that light became brighter and brighter and moved towards us. But how a machine could fly at this altitude, given speed ? I wondered. A cargo plane recurring in the Mirabel area have stalled before. No position light, no flashing light, was visible, which confirmed to me that we were in the presence of a plane of non-conventional type.

After this finding, I concluded that the "object" would go over the 148 Westbound. So I decided to speed up a little so you can cross his path. Miscalculation ! The object was moving more slowly than I had seen, I had to go back a few hundred meters back to make adjustments.

The bike quickly extinguished and parked on the shoulder, I remember no cars driving on the road in question. It was quiet flat. BLANG ! This is where it happens ! Heat had pierced my body. I was alone in the world as, faced to accept what we saw ! Ma copine, who was a few yards to my left, no longer existed for me, I was so entrenched in my bubble. Pardon my bluntness, but at this time, "F * ck my bases in ufology". I lost all my bearings. Transfixed by the lights in the unit, I could not under any circumstances leave the eyes.

A few meters from us, impossible to identify the actual shape of this dark mass. But under the appliance, it was something else. These powerful lights seemed to be at the center of this mass. Under the machine, a huge rectangular window exuded its own light from withinHere ..., I refer to a "showcase of commerce" because I could see a dark frame in its contours inward. Decorated with some white lights all around this part, these lights were the color of metal halide lamps, white less "pure" than the central part. The unit above us, I heard a gentle air movement such a flag dancing in the wind, nothing more. The object therefore kept running over the field, behind us, Westbound. Curiously, We were promptly seated on the bike and, well before the disappearance of the object on the horizon. Why not be stayed until its complete disappearance ? I do not know! A small red light was visible to the rear, You do not m'abuse ; en revanche, my wife can not confirm : she does not remember.

As strange as it may seem, we had not really discussed the topic and depth. Ashamed to have witnessed the phenomenon myself ? Perhaps. I do not know ! To be considered and to be treated opportunist and liar ? I do not know what to say. I can confirm that the discussion on this observation was brought to oblivion for a few months, until the day Yann Vadnais (GARPAN), a colleague and investigator, contacted me to share reports and testimonies that our small pool had accumulated during the year. Total Fitness Question ! A punch in the face ! I had assumed this had happened and face my reality. I immediately went to see my wife who was working at his computer ... asking :

- "Baby, You liabilities, I must give an account to Yann, observations and reports, j'pense and that will add to what we saw in the case. J'pense it is important to report the case of road 148 in our reports ... "Silence. Moment of reflection on my part ... "Can you explain why we had not spoken of our observation ? Crime. Yet, Is not this the most important of our cases ? »

My wife had turned to me, stopping all occupations, and said awkwardly :

- "You are related, tell people you saw silhouette of a humanoid in a window of a UFO, I do not want to shut myself up and go for a wild. » 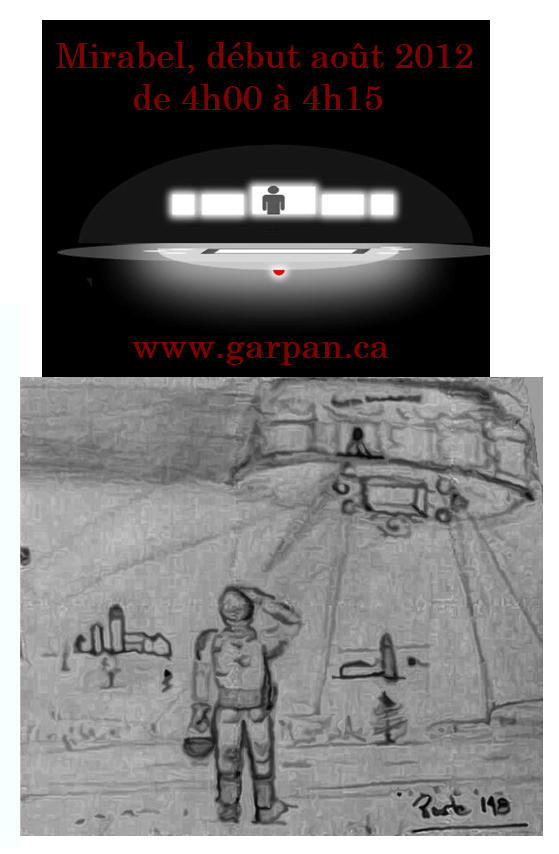 She works in the field of health for several years…

« WO MINUTE ! ». Has not experienced the same problem and I find that it does not have the same version as me ! « Shit ! ». Mouth dropped me down when I asked him to repeat his words. I had read somewhere that regularly came to the witnesses do not have the same perception to the same observation ... But, I lived and confirmais by myself, these facts. You know, from my wife who is a rational person and down to earth, I quickly realized that it was not a joke on his part. Especially observe the discomfort on her face.

Since that time, I have not tried too hard to learn more about the version ; I prefer to consult a specialist in hypnosis to make up some details that I would have failed to pay attention. The only thing I have left to support my statements, is that I am available to pass lie detector by a credible organization in this area. I am without words ! In terms of my wife, I can not afford to influence their perception of the event. A hypnotherapist, specialist phenomenon, would be appropriate to confirm and compare observations. Thank you for reading.

I will publish a small supplementary report shortly. »