Investigation and text by Yann VADNAIS

Here is an extraordinary story about a "huge rectangular vessel" observed for two minutes… but, alas, reported by one witness… Comme on dit : "Large claims, great evidence ", that is to say that more evidence is incredible, more evidence is needed so that we can use such cases to the study of UFO phenomena. Thus, it is evident that the flatly GARPAN considers the probability of this case, like all the observations reported by one witness, as constituting 1 (on the scale of 1 to 9 de l’probability index). We report this case as any other "single witness" from a sincere witness, authentic and credible ; although in this case the evidence is even more difficult to believe, given the history teneure : en effet, how a "ship as big as a city" would not have been seen by hundreds, even thousands of witnesses… About Us bring to tell us.
However, we also report that testimony with a certain duty, because I personally know the witness for four years. It's not like when we report a case of a witness with whom we spent only an hour or two. When the life of the witness we know, as has often attended, we could hear and hear again the "same story" from year to year, it is not that we are more wear to believe, but that leads us to question more deeply, firstly, the subtlety of the UFO phenomena, and secondly, on the psychology of witnesses.

The first time this witness told me his experience, it was 2010, we were at the festival organized by the Perseids UFO ALERT-network. It was the afternoon, and the witness told me that while arranging his telescope, for the evening. So I asked him to show me the, and here are two drawings he executed, on the corner of a table Picnic : 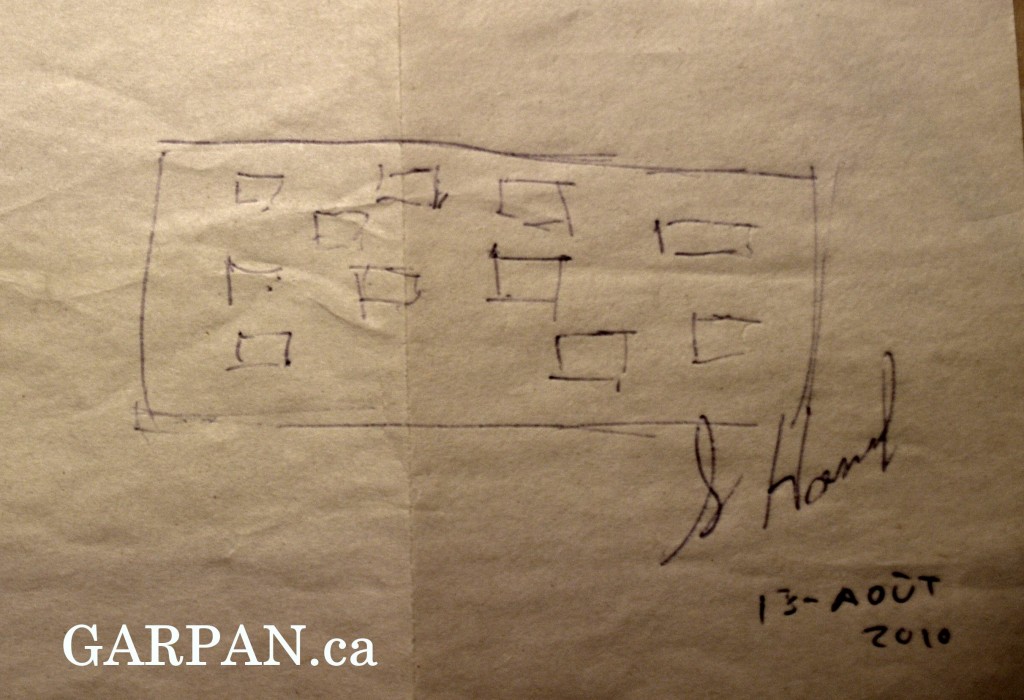 En mai 2013, during one of our courses Introductory Workshop in ufology, I asked the witness to come in person to tell her testimony before students. For the occasion, he had bothered to apply, first, to make a detailed drawing of what he saw. He brought us this drawing : 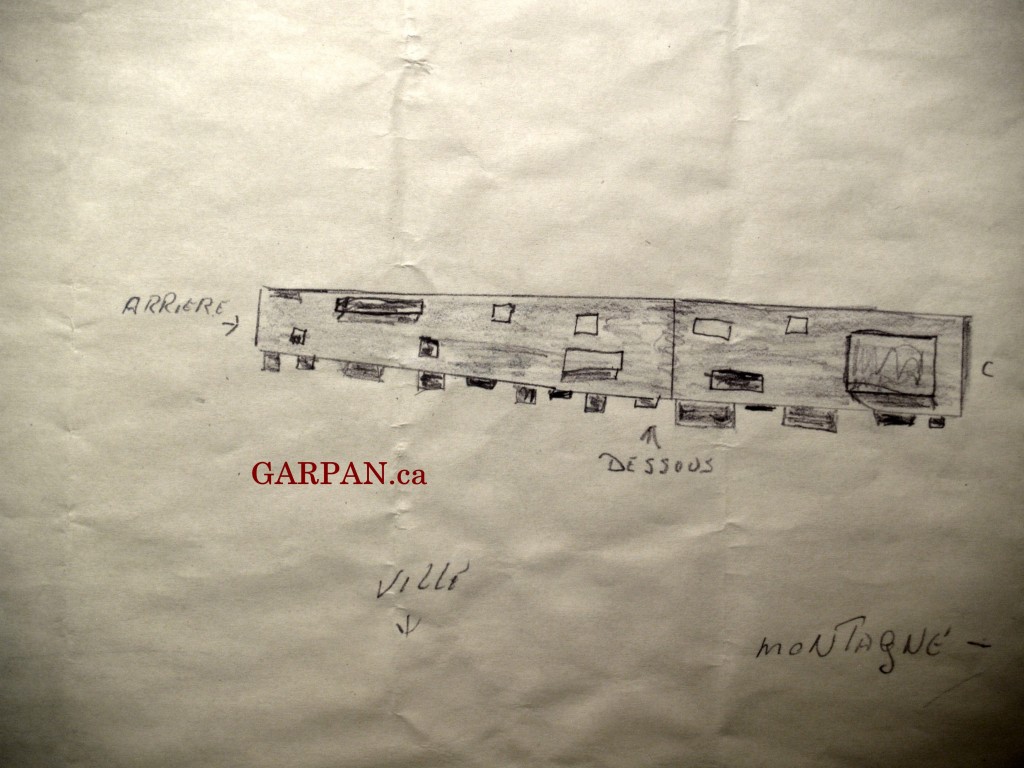 From this drawing, we were able to reconstruct the scene of the event : 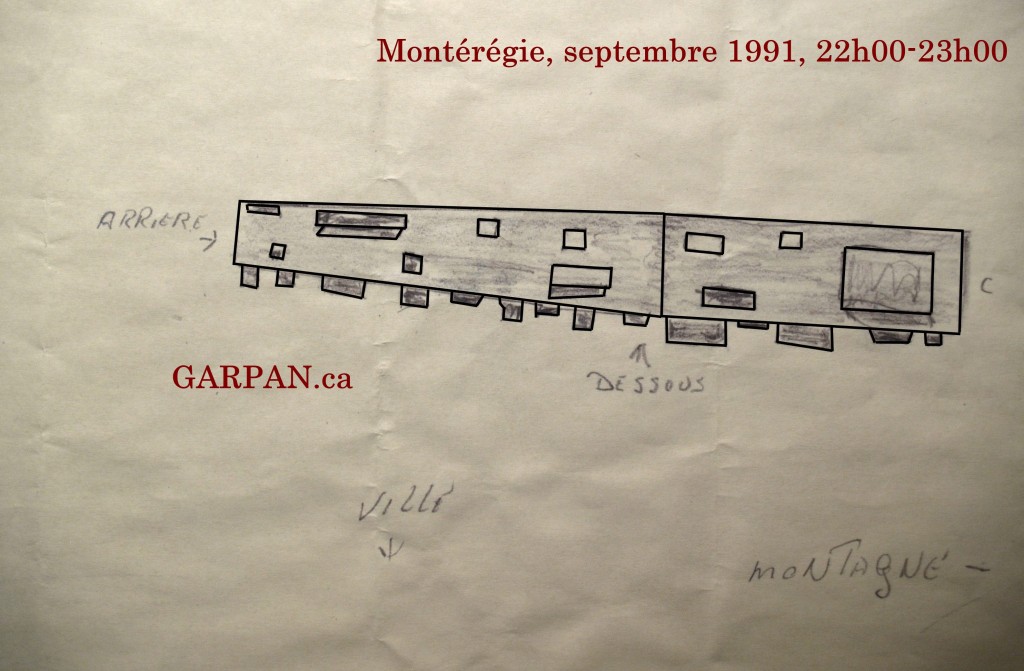 Thus, to students who listened, one of them, A.A., interrogea le témoin. 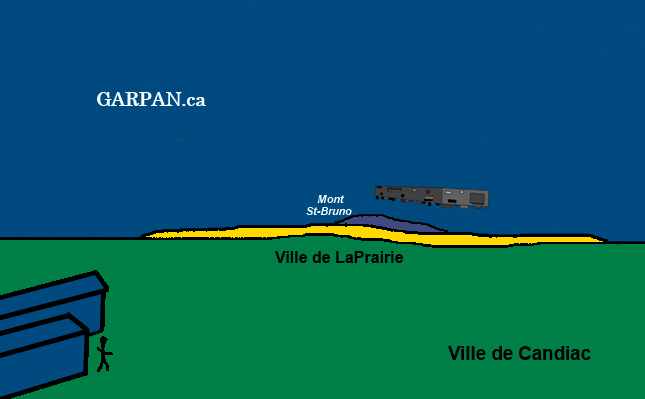 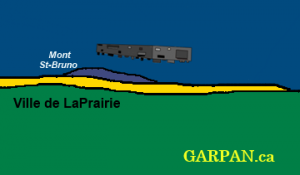 It : Ok, so it was still quite low ?
T : Low enough.
It : Then what form ?
T : It was rectangular, finally I could see. Underneath, it is as if there were little bits around the vessel, along the sides of the vessel and also.
There was no light, clarity we would never have seen ! The only way to see this vessel then, it was illuminated by the light of the city ! This is the only way you could see it because it was about to 9:30 p.m. to 10:00 p.m. in the evening.
It : It's still early in the night.
T : Yes, this is the only way you could see ! It was thanks to the light of the city we could see. This was no sound and the way it flowed, uh ! It was rectangular, but it actually followed, it is as if you took a cigar and you put aside !
It : So when you saw it was moving all the time ?
T : All the time.
It : It is not immobilized ?
T : Never.
It : No Noise ?
T : No noise, no its nothing.
It : He seemed to have windows ?
T : I will not say windows, more like blocks those ones, it is difficult to describe, this is like drawing I did.
It : The speed of movement ?
T : It was slow.
It : More than a passing plane ?
T : Oh oui ! It was very slow.
It : You saw how long ?
T : For two minutes.
It : It was very slow and it was there just two minutes ?
T : It was very slow, how I was, my boyfriend and I, we discussed outside, we took coffee. Here "I wanted to go pee" so I went between two garages, there is a little corner of darkness and this is the moment that I saw the object in question !
It: Are you felt that it was like a mirror that was transparent ? How would you describe ?
T : It is a dark gray metallic, but a dark gray ! 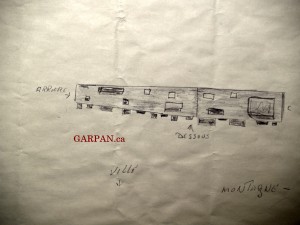 It : How did you feel ?
T : My eyes have wept !
It : You scared ?
T : No fear, but it was something impressive. An emotion that you do not live every day !
I try to call my boyfriend "Come see it ! ». But it never came to see, he thought I was doing him a joke. He could see himself ! Out of the shadows to tell him to come see, I do see more !
It : So you did not see from ?
T : Not really.
It : And you did not see happen ?
T : Never, where I was, it was DELSON, the south shore of Montreal. I looked in the direction of Saint-Hilaire these corners then, that was heading south. 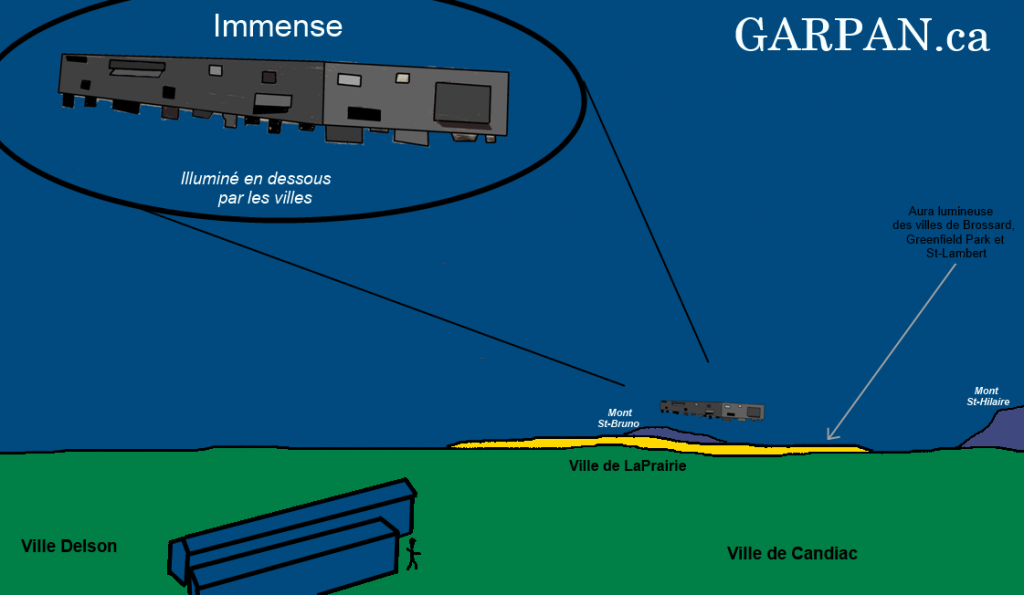 It : After seeing, Did you notice something unusual ?
T : Not, but I have not slept all night with what I saw there. Today there, I think about it, pictures truly marked me, that's what I saw on television, I can pretty much describe the same thing ...
It : Have you ever seen something like this has tv ?
T : Yes. We can talk as in the TV series Galactica (Canada-US issue, between television 2005 and 2009) the type of vessel they ! It looks like this ! 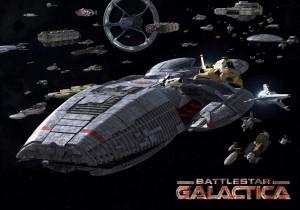 It : So you've seen it on TV ?
T : Type similar to that ! This is the reality which approximates fiction. Is it really that ? I can not tell if it was alien, but I think if, it was so huge ! Bigger than a city !
It : It did not shade the ground ?
T : Nothing, no sound, no light I never have seen the light without the city.
It : That evening, the sky was clear ?
T : Yes very clear.
It : You say it was above what city?
T : Above Saint-Hilaire these corners then, or perhaps nearer above Brossard. 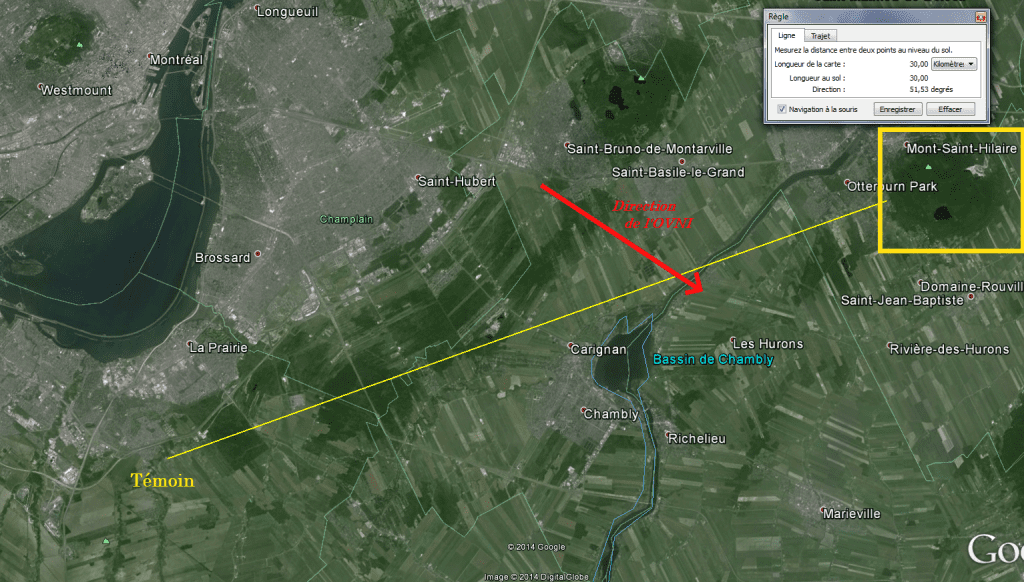 It : You never thought of an optical illusion !
T : Not, not how I saw it.
It : The degree of elevation, you could see him 20, 30 degrees?
T : Approximately 40 degrees.
It : It was more in our atmosphere or outside because it was so big ?
T : It was really in our atmosphere.
It : Quand tu as vu cela, is that there were planes at the same time in the sky ?
T : Nothing.
It : The corners were not rounded ?
T : Not, what I saw, was rectangular ! It was like a box ! 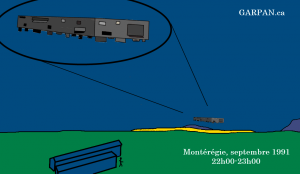 It : Your vision was blurred or clear ?
T : It was very clear. I really looked at it, impressed.
It : You saw still far, not over you, but movement. You looked to the West and you tell me it was going to the South. The fact that it was far, that was why he was rectangular or if you had was below it was square ?
T : It seemed rectangular. It was really impressive ! Like a big box that walked.
It : Now I understand more your story you had told me in part, to the disais : "I was in a rural environment Delson between two barns. Delson is actually rural looking Brossard is further, there is plenty of light to the South Shore (of Montreal) : that explains why you saw him as well.
Why did you insinuated that the day we do not see, if it is dark gray ?
T : I do not know, there is probably some sort of transparency. I do not know their technology.
It : What amazes me, is that you come to this intuition then. Tu l’as vu foncé, what makes you say that the day when we would think we would see more : Why are you inclined to believe that the day we simply would not ?
T : It is a transparency mode or possibly maybe you would see in the day it happened one evening and it was thought that the person see. As you can tell we would see, but it was evening, I can not answer the question.
It : How many kilometers around your observation ?
T : Between Delson and Saint-Hilaire, I would say just a couple of kilometers may be more [in fact it is 30 km]. 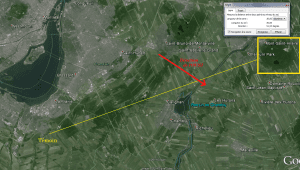 To rely on this evidence and draw valid information, it will of course, that : or other witnesses say, or a similar case arises from credible witnesses, to — by comparative — to draw parallels and differences and so build an early understanding of these "vessels" — if any ! Besides, we would be interested to know if such exist radar signatures…

This is the ambiguity in which we fall when we face the testimony of one witness. Although in this case, we know this witness personally as a friend and give him our trust, from a scientific point of view, we are in the need to present to the public this observation as any singular, and suspend judgment pending similar cases — like so many other UFO case. It should also — but perhaps most — reserve the second option that the UFO was far less, and therefore a lesser size that would explain its size is not observed by hundreds of people…

It should nevertheless specify that the conviction of witness — which states that "it was great", "As big as a city" — is questionable, in the sense that everything is a matter of distance : the subject was far more, largest UFO was there. But the witness is adamant :

As it happens, if such a type of UFO turns real, whether similar or other control cases resurface, then we will have to seriously question. If such devices never actually fly over cities (or rather the outskirts of cities, view map) Yet populous, I think some segments of testimony will be given clues :

a. witness assures us that it is only through the illumination of nearby towns that could detect the UFO ;
b. maybe it is because of its distant view, eccentric, que l’OVNI a perdu son « camouflage »…

TOBI our colleague has brought to our attention a case alleging review Flying Saucer Review (January 1979) that could interest us here, by the dimension of the UFO :

For the Canadian ufology, be remembered especially, the gigantic vessel was observed by more than twenty-two (22) witnesses located in three areas along the Klondike Highway (for a distance of 216 km), in the Yukon Territory, the 11 December 1996 :

Our colleague TOBI also flush out this article on radar detection of a gigantic ship by the Royal Air Force 1949 :