En guise d’introduction, a quote from the magazine AFFA (Jean Casault, 1969, no. ?, p.12) for a similar case in the same locality, but dating back three years later : 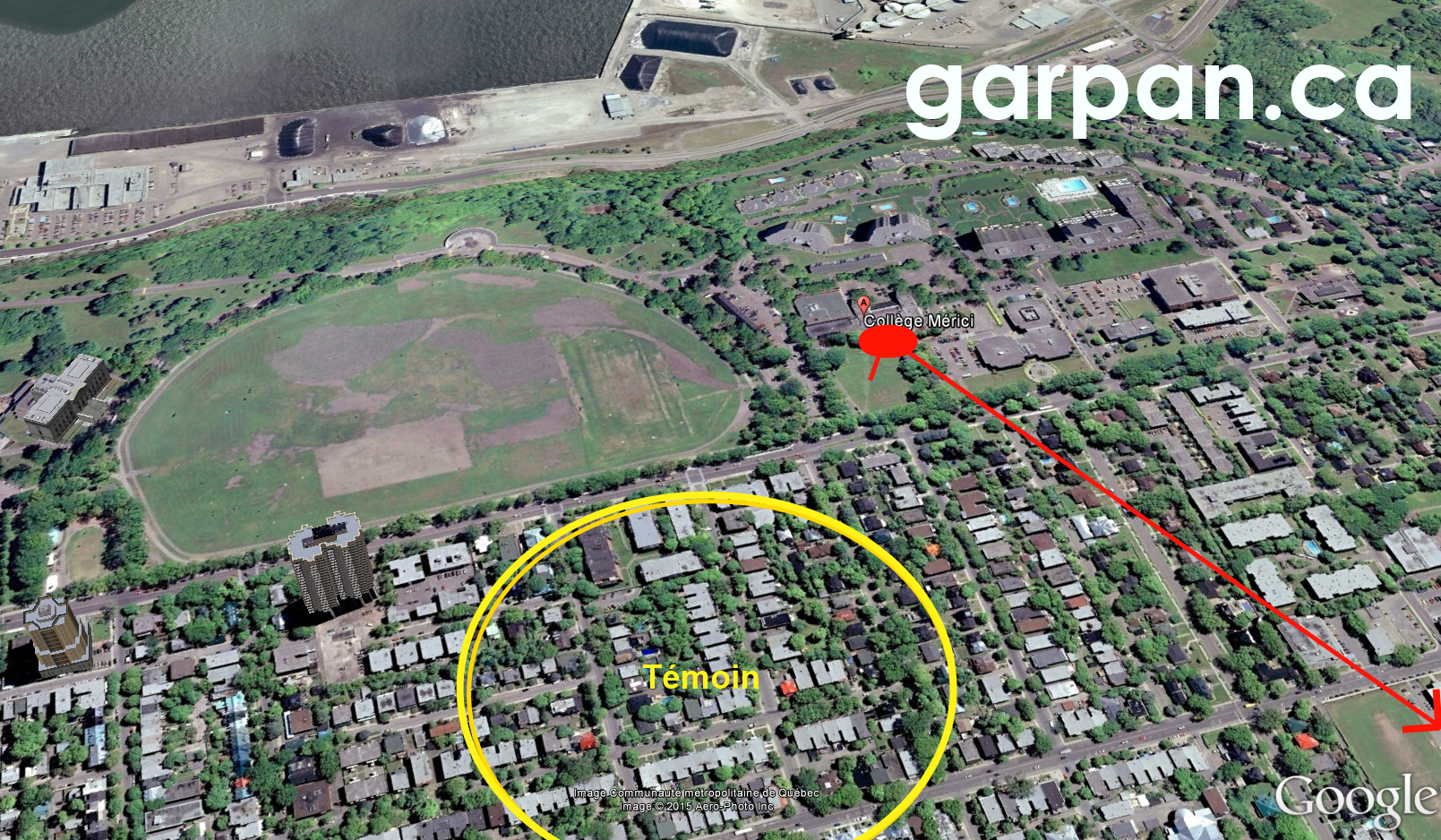 Madame B. : Okay as a yoyo exactly. How should I say ? A form, not an oval, but a rounded oval, more rounded on both sides put.

Pierre Asselin : As a "donut without the hole in the middle" ?

Madame B. : Yes, yes, absolutely as I saw it aside to rise, [but] I could not see if there was a hole or no hole [transverse to the UFO center]. But the form of "donut", it's more common sense. 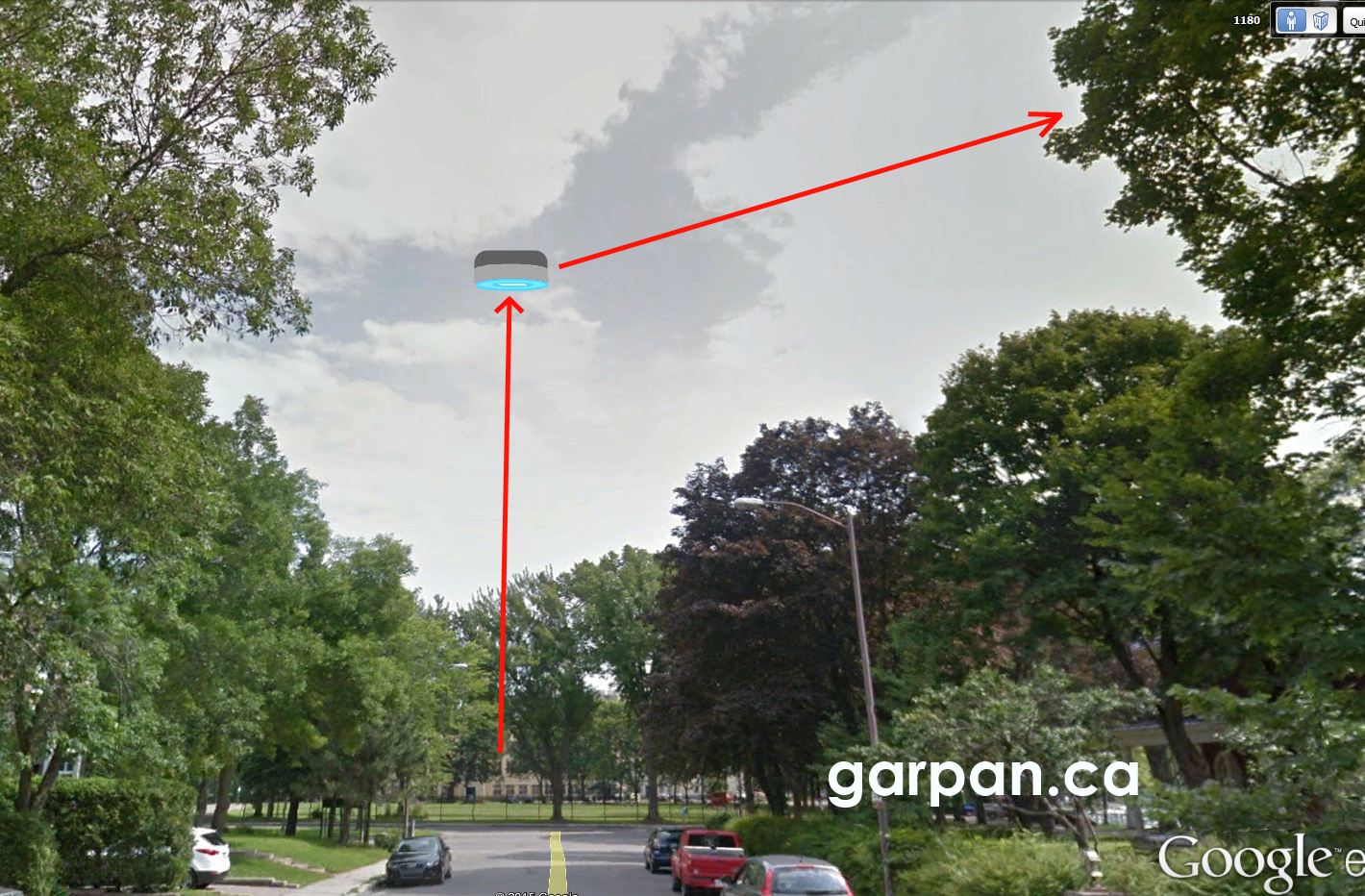 Pierre Asselin : You only see the side while ?

It was the morning, sunny, then, behind me, there was is. This « case-is » [UFO] was obviously informed, but she was brighter below. It was brighter than the sun that is light. It was very white-blue, très incandescent.

Also, there was like a small gray smoke[and]-black[and] between that [UFO] and the ground for it [l’ovni s’é]rose. So me, I was on the ground in front [College] Merici. [At that time,] it was not [land] while blocks of apartments Mérici, de condos, there was just College Merici. So me, who had been resident there, [during] seven or eight years, I thought : "Here [therefore], it is in their forward field ! ». There was a large field between here [that place] and the [boulevard] Grande-Allée. 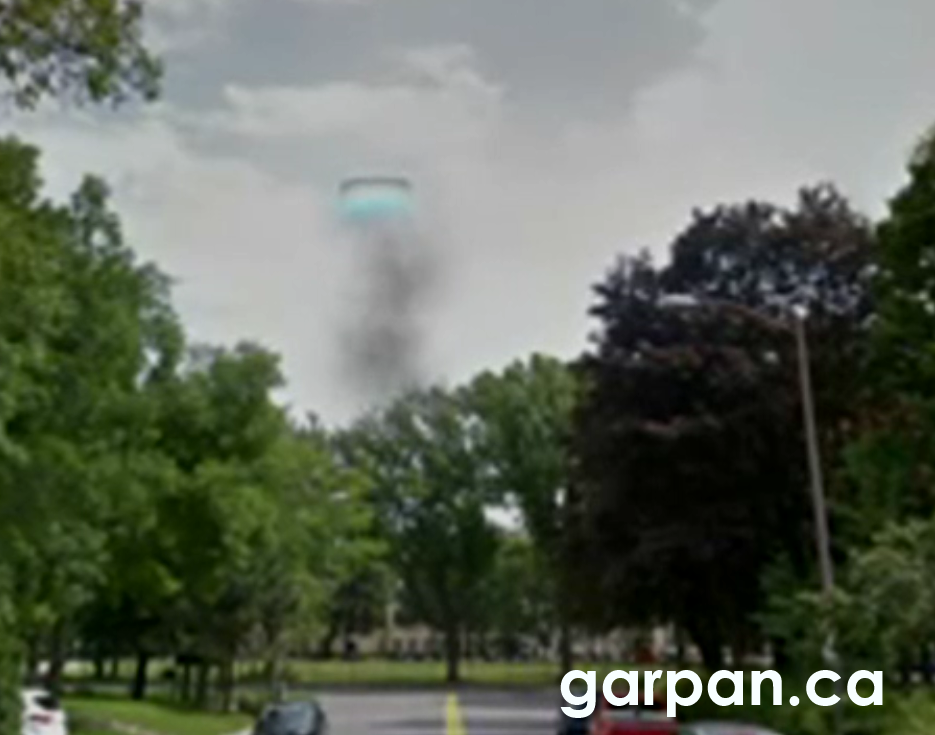 Reverse against, when [UFO] did [product] a small black smoke below, it was informed many, very, very, vivid below.

Then, to [a] time, it stopped. There was little more than smoke, or anything, and it [UFO] has had a certain height.

Here for example, with a snap, it began to evolve by going west, west-north.

Pierre Asselin : At the horizontal ?

Madame B. : At this time horizontal.

Pierre Asselin : It was placed horizontally.

Madame B. : It [UFO] had slowly mounted vertically, for perhaps two seconds. You understand that it has to appear to be all that long, but [Event happened quickly]…

In [a] time, that [UFO] stopped up and there was more smoke below. And then, it seems to me that there were ... - I do not know if there was still white lighting below, bright white.

As, that [UFO's Event] had finished shrinking so fast ...

There were electrical son who passed [in my field of vision], so it was [= The UFO was located] from the last [in] the bottom and the next [above].[1]

Pierre Asselin : Ayoye ! What color was ?

Pierre Asselin : The UFO was there the metal air ? It was round and clear ?

Madame B. : It was dark on top, as I said earlier. Top up a little towards the sides, following a little borough, but not much. It was mostly below [that c & rsquo; was] brighter, but when it has gone spinning, ça the disparu [= After smoke extinction, Brightness was less important, and then it went away until it disappears].

Brightness, I do not know if there was [during takeoff], because, like that dwarfed, I saw less. Then, that eventually [n’]nothing could be completely.

Madame B. : And then, is, although I had a young baby. I called my husband who was trying to shave. I did not want to leave my observation point, then let the baby to go to the bathroom to tell my husband to come and see. I was afraid of losing [view], so I stayed there, while saying from time to time to my husband : «One, one, one ! ».

Then the little maid [housewife] I had also [was there], but it was not made in the kitchen, so she did not come, I was in the kitchen.

Then I'm sure the people who [have] the house where we are now, our electrical son being in the same place in that time, I'm sure they would like us, if someone wanted to see, because there is almost way to make small calculations when we say we are in so many feet of electrical son, then is both feet off the ground[2]…

Pierre Asselin : Yes, with triangulation, one is able to judge distances and dimensions.

Madame B. : Someone doing a little math, I think it could [reconstruct the trajectory and the approximate size of the UFO]. Although I thought coudonc, it had interested me much and I had a good mind to take the car and go see. I thought : "If it's in the field Mérici, en avant, surely as the grass will be burned, it must seem, there must be something. ».

Pierre Asselin : It lasted how long at all ?

Madame B. : Oh Mr. !… One minute, a minute and a half ... Count it [such an event], it is difficult to assess. It rose, it rose slowly, but not for long. Wait a bit. Two, three minutes[3]. Two, three minutes, [for as long as] mounting [= Climb of the UFO] then [that] Early smoke [escapes]… The small smoke stop [just to escape] before it [UFO] take the edge of [en s’enfuyant] to the horizontal. I would say two minutes or three minutes maybe, I had the time to call my husband several times.

Pierre Asselin : When you called the airport, What you were told ?

Madame B. : You're disais : "If they have them other observation ? ». They told me that no one else had reported them something, "... So we will take a note. ».

Pierre Asselin : Listen, if it does not bother you, I recorded the interview, because I often do that to help me as a reminder ...

Pierre Asselin : The interview we just did here. I will not write an article with this, but I will send your testimony to the people who collect such data.

Pierre Asselin : You do not mind ?

Pierre Asselin : At least, like that, it'll stay. It will stay traces of your observation.

Madame B. : Sometimes, we can say that it is the fruit of imagination, but I am very skeptical to all sorts of things. I'm not paid to go see feature films, d’extra-terrestres, then it all. I'm not paid to follow this kind of films, not. I have other areas I, my interests. Although reports about things in the atmosphere, in the cosmos, then it all, I find it very interesting. Scientists have meetings, and who make discoveries, I find that interesting.

Pierre Asselin : Does this event influenced you later ? Is your opinion has changed about it ?

Madame B. : Yes, I may have been more watchful, more inclined to observe if something looks a bit dodgy or what.

Pierre Asselin : Yes, Is that so ! Although it was very interesting, I'm glad that someone has called me after my recent article.

[1] The witness described here where stood the UFO before clear off to the northwest.

[2] Here you can see all the alertness of this lady from 80 years.

[3] In that case, investigators have a year to determine the length, mais M. Asselin has not applied during this interview. We believe that " 2-3 minutes "are not consistent with the evidence and the observation has probably lasted less than two minutes.