The investigation of the humanoid CHAUVEAU Park and "professionalism in ufology"

Following our brief article on "professionalism in ufology" (see HERE), we believe it appropriate to take the case of humanoid photographed Chauveau Park both to give a concrete example and to keep the public informed of the progress of the investigation.

We published there ten days the announcement of a very credible case photographic evidence of a humanoid, in the form of a video clip summarizing our investigation. We deliberately published a photograph LESS DETAILED humanoid than original, for two reasons :

1) We want to reveal this extraordinary authentic photography, extremely rare, through appropriate media platform that will do justice to the importance of this document and join a wide audience ;

2) We wanted to raise and see the "backlash" as the general public that our colleagues in ufology.

… and we were not disappointed ! Of the hundreds of comments received, very good ideas or hypotheses have been advanced by the public, GARPAN and is very grateful for sharing your ideas ! are welcome.

The hypothesis of a "masked rider"…

One of these "brilliant" analysis, which has been well worth having "scaffolded" (literally), was carried out by the so-called "Brother Claude Christave", that drives the popular Facebook page "ALIEN RESISTANCE GROUP". As it is the "best" explanation defended far to account for photography Park Chauveau, we briefly summarize to keep the public informed of the course of our investigation and the reaction it provokes in our peer.

Based on the image of our YouTube video, le « Frère C. Christave "argued that it could be an engine, or rather a "masked rider", arguing that he noticed immediately is the position of the body slightly bent with arms outstretched, approximately at the same height, as if holding a handlebar.

To our surprise, le « Frère C. Christave "taught us the existence of BMX helmet-like humanoid figure of Chauveau Park : 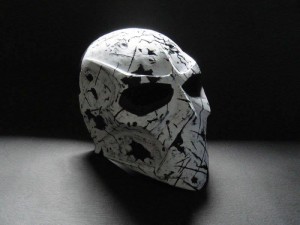 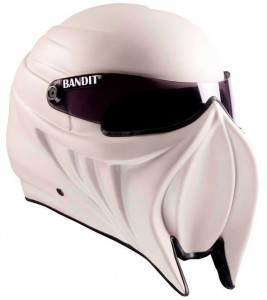 As the resolution of the photo he had not so much put all the details of "costume" of humanoid evidence, and that by cutting out specifically the portion of the picture where are the hands : 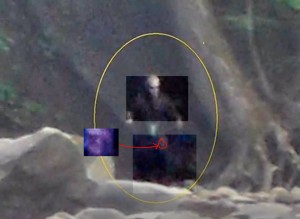 … one could guess as the existence of a handlebar with a rectangular central light, our Brother Christave cried "Eureka ! », published his early demonstration and considered the case closed (and annoy me more in private).

The need to test all hypotheses in ufology

Before starting investigations in ufology, I first read and meditated long classics Philosophy, especially Plato and Nietzsche. Or, since I was faced with solving dozens of UFO cases that claim true, case where I was only expressing an opinion on an investigation file : I developed new practical applications for "Sophistry in UFO investigation". To me, it is the most far as possible to resolve conflicting hypotheses argue a case investigation. That is why I have no problem to receive the hypothesis of a "masked rider" : I can even give an additional argument to this hypothesis by stating that just a "skatepark" is located a few hundred meters away.

It is said that what really interests ufologists, it is "the truth" ... While each case is argued can best, because if its assumptions are faulty, it will abandon.

-Argument against the hypothesis of "masked rider"

However, this hypothesis of "masked rider" ABSOLUTELY proved untenable, and here's why :

– It ignores fifteen (15groin) d’anomalies (!) highlighted by the analyzes of the original photograph ;

– It ignores the fact that the supposed "handle" has a protrusion that makes up the side of the right knee of the humanoid, and that, to this end, a kind of "cable" dangling back toward his left hand ! ;

– It ignores the fact that the supposed "handle" is not symmetrical on one side and on the other - and, more, the hands are at the same height ;

– It ignores the fact that the front wheel of the supposed "BMX", or the fork thereof, are absolutely not visible in any photographic analyzes ! and that, although the front wheel and fork should appear separately given their linearity and composition of their materials. It is unacceptable to say that the wheel and fork hides in the shadow of the left leg of the humanoid, car :

Jean Morissette testing the hypothesis of "masked rider" (notice that he had to cross the river to get there !) 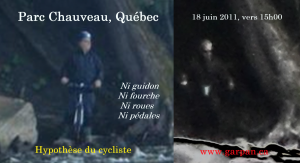 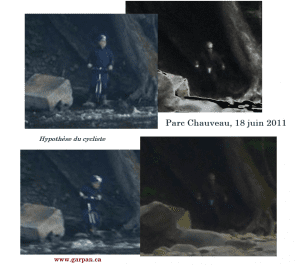 We will not reveal immediately what these fifteen (15) anomalies that confront us recognize that no explanation justifies the presence of this detailed humanoid on a clear photograph ! However, to encourage reflection and revive the debate, Here are two of these intriguing anomalies :

However, we believe it necessary to conclude this article denouncing the blatant lack of "professionalism" of a colleague, engineered to us.

I initially welcomed with open arms Brother Christave, but soon his private intervention to extract me information has denounced itself : "Debunker" at all costs this photo humanoid and "prove easily", accusing me excited for me peccadilloes (while we are five (5) to investigate the matter), and openly declaring that "me (I) do wrong to ufology " !

Brother Christave then published a "resolution" of our picture on orandia.fr. When I pointed out to him that he was wrong to publish such a "flawed demonstration", disregarding the arguments against, I had given her in private, he just simply publish our entire private chat, instead of just cite three (3) lines of my argument against. This behavior is unacceptable to, cons-productive and is probably more "wrong ufology", that of well…

His side, the pioneer of ufology what Quebec Jean CASAULT merely deconstruct this "hoax" in describing the Investig.-in-chief of "pathological liar first class"…

In contemplating these stampedes, we can understand why the claim of ufology to be a scientific discipline or, worse, a "profession", is met with great skepticism and ridicule…